On the beautiful sunny morning of March 23rd, fourteen members of the guild enthusiastically gathered to explore more about spinning and weaving, including a demonstration on joining two wefts ends.

Three months into the year and our meetings have become a hive of activity.  With our Explorations in Colour Project well underway, it feels like there is a constant element of productivity serving as the backdrop to them.

Several of the members brought their tapestry projects to the March meeting to show their progress.  All are very different so far, which is exactly what we had hoped for and demonstrates perfectly, how individuals interpret the same brief. 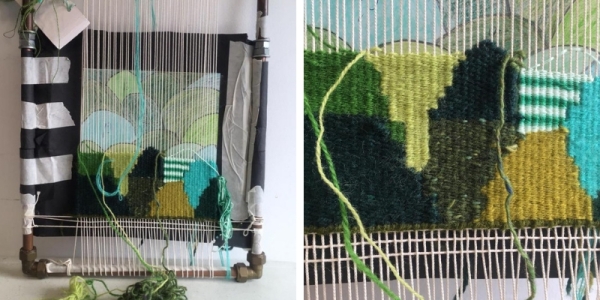 Mary set up a tapestry on a copper frame loom which she worked on at the 50 Plus Expo for demonstration purposes.  It depicts solid areas of green and is inspired by various greens of the rolling hills outside her home. This is a more simple tapestry technique than in her other piece pictured at the beginning of this post.

Those members new to weaving or those in need of a refresher, had asked for some guidance on how to start a new weft thread when you run out of yarn? (or joining two ends).  Weaver extraordinaire, Pascale gave a fantastic demonstration and then patiently and graciously answered many questions, for which all present were very appreciative.

In addition to the tapestry weaving Heather and Margarita kindly brought their spinning wheels and Mary and Pascale supplied drop spindles.  This led to a brief conversation about yarns; What’s best for spinning?  What’s roving?  Where can these materials be purchased?

Samples of wools from various sheep (a sample of fleece from a Zwartble Sheep went around the table).  Other materials which can be spun, woven or knitted e.g. dog hair, Alpaca, rabbit and silk to name but a few.  A couple of people wanted to know more about Icelandic Wool and how does it differs from other wools?

With so much interest in wool and other fibres for spinning, it’s a subject that we will return to as soon as possible.

Heather had also brought along her hand carders and demonstrated carding to those less familiar with this technique of the spinning process.

All the talk of yarn segued nicely into a Show & Tell where Joan showed the group her table mats which she had recently taken off her loom and Stella modelled her lovely new hat, knitted to match the scarf she had made previously.

With such a full agenda of items to get through at the meeting, there was limited time to discuss the fairs and shows the guild hopes to attend this Spring.  As you can see in the sidebar, we hope to be at the West Cork Yarn Festival, Inishannon Steam Rally and the Charleville Show.  Currently, we’ve nothing written in the diary for after that but realise that could easily change.

Our next meeting will take place on Saturday 27th April. 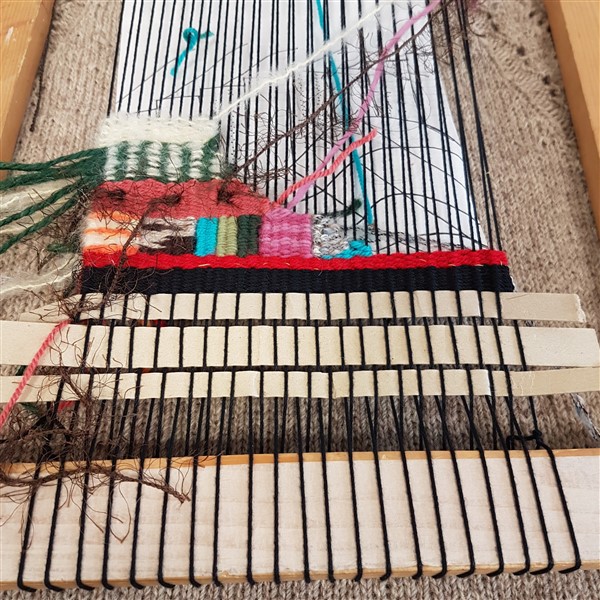